Black Point, Exuma Islands, Bahamas - Back To Where We Left Off A Year Ago

It's been a long run starting the New Year in Titusville, Florida and finally arriving at Balck Point in the Exuma Islands of The Bahamas where we had to turn back and return to the states for medical reasons last year....Finally!

We had fun in Ft Lauderdale seeing all the Mega Yachts as well as some of the awesome custom built yachts. By the way, this one was my favorite. The Captain was so proud of his vessel and I would be too.

Gayleen said goodbye to her new Pirate friend and we were on our way south to Miami to stage for crossing to the Bahamas. 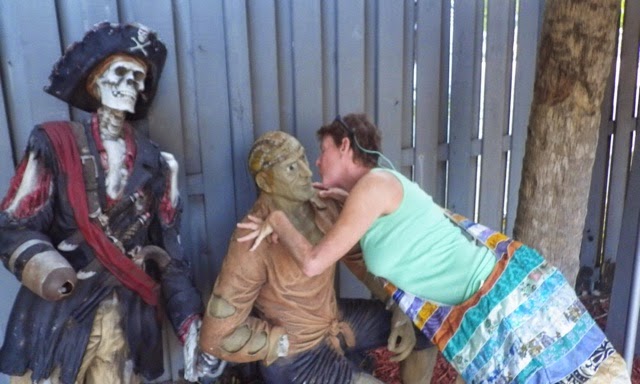 After a very nice sail offshore from Ft Lauderdale to Miami we anchored in Marine Stadium for one night. The Miami skyline never disappoints from this location. 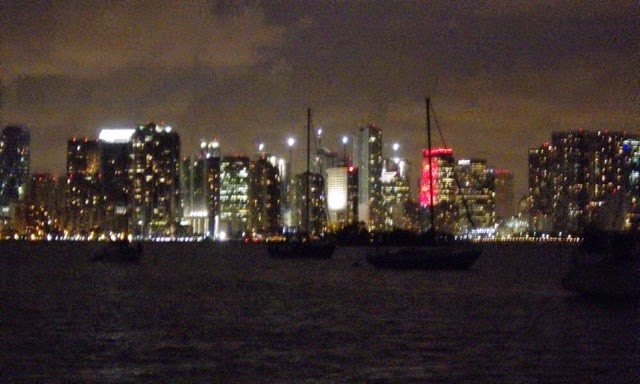 The next night we anchored in Name Harbor awaiting a weather window to cross the Gulf Stream. Fortunately we only had to wait a day for a one day weather window that would allow us to cross safely to Bimini and enter the Bahamas. We were surrounded by boats tHat had been sitting there for almost two weeks waiting for proper weather. We left No Name Harbor at Midnight and after zig zagging in and out of cruse ships and cargo ships we arrived in Bimini shortly before 8 A.M. and cleared customs and immigration that morning getting our one year cruising permit for $300.

If we had two good days of travel weather we probably would have gone straight through to Nassau but this year we only had a day. The strong easterly winds held us in Bimini preventing us from traveling towards Nassau and the Exuma Islands. Although we were anxious to get going we didn't mind spending time in Bimini getting to know other cruisers that just came across and seeing old friends that live there that we met in previous years.

After consulting with our weather guru, Chris Parker, we finally had our day to head east. The winds would be strong but coming from the southeast allowing us to sail across the Bahama Bank. Our plan was to do half the trip during the first day and then anchor in the middle of nowhere on the Banks and sleep waiting for the winds to calm down for a next day crossing of the deep waters of the Tounge Of The Ocean to Nassau. Our waether guru assured us that the winds would subside by midnite and we should sleep well for the second part of our trip the next day.

We left Bimini along with two other boats that we met in Bimini. Dabulamanzi is a Tartan 33 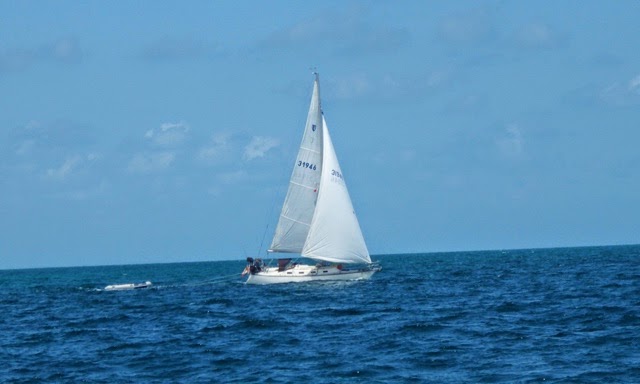 and Varekai is a Telstar 28 Tri-Maran. 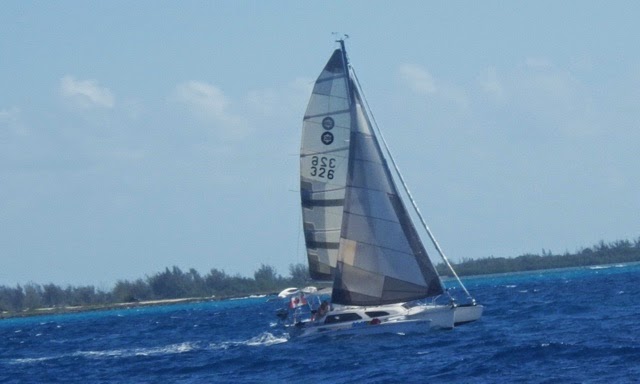 Each boat handled the choppy conditions differently and we traveled at our individual paces. Being a heavy boat, Pearl pushed through the chop and arrived at the anchorage just after sundown. We dropped anchor in strong winds and rough choppy seas. The anchor held fine but we were certainly rocking and rolling. Dubalamanzi arrived about an hour later and anchored next to us and later Varekai radioed us to say they were still quite a ways back and were stopping where they were for the night.

Weather gurus aren't always right and that night he was just a little off base with his forecast. The winds never subsided at midnite and at 2 AM they even got stronger creating very rough conditions. I was awake most of the night while Gayleen slept like a baby. Fortunately by daybreak the winds had calmed down and we had a wonderful trip motoring east to anchor in West Bay on the opposite side of New Providence Island from Nassau.

By the end of day two everyone was exhausted on Pearl and Dubalamanzi except for,Gayleen who had one of the best nights sleep,she had in a while. I am not sure if having the other half of Pearl's crew loving sleeping through rough conditions is a good thing but at least she was happy. Varekai was low on fuel from pushing through the rough conditions and stopped at another island to rest and refuel so they were no longer with us.

We left Bimini the day we did knowing we would have to motor most of the first two days hoping to be rewarded with a nice sailing day for the last leg of the trip to the Exuma Islands from New Providence. We knew it was going to be a good day when we were escorted out of our anchorage by three dolphins that seemed to be flying through the air in the calm clear waters off our bow. 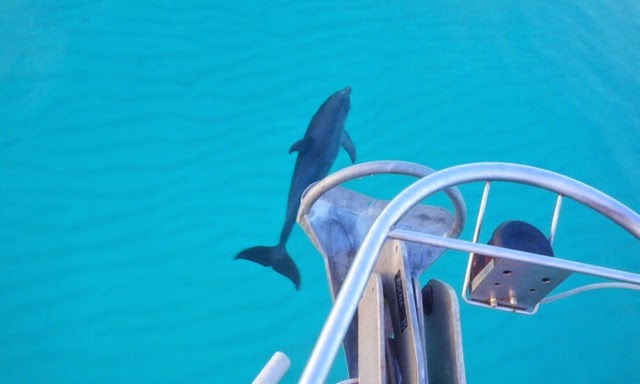 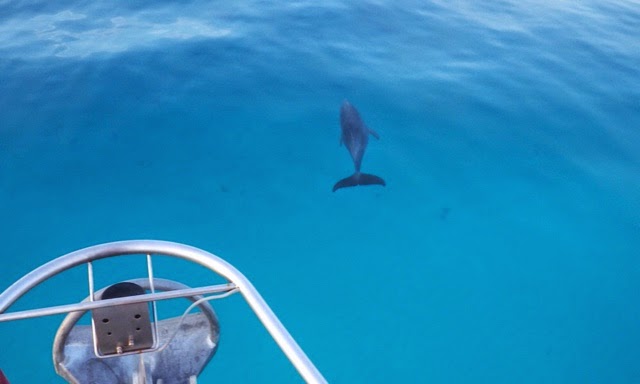 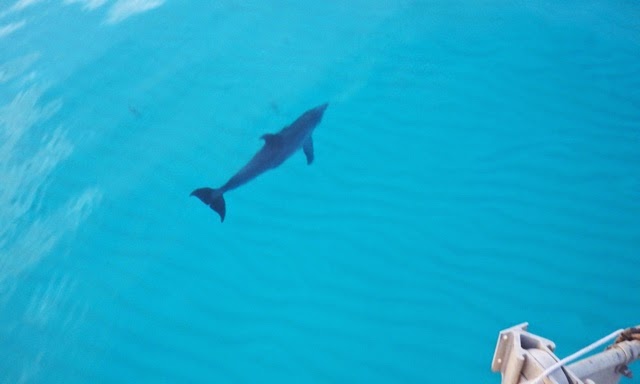 We had a wonderful sailing day all the way across to the Exuma Island chain that made all the effort of the prvious two days worth it. The next several days were,spend working our way south through the Exuma Park taking time to snorkle on crashed drug runner planes. 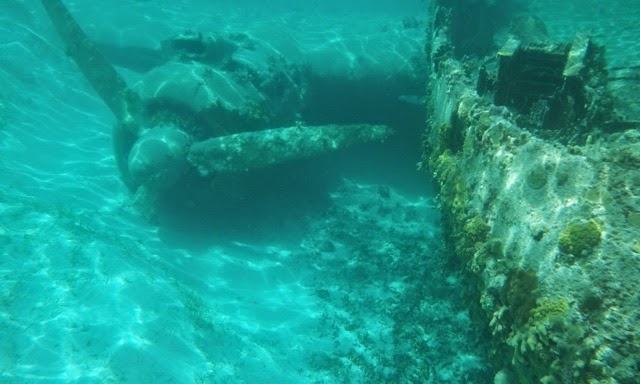 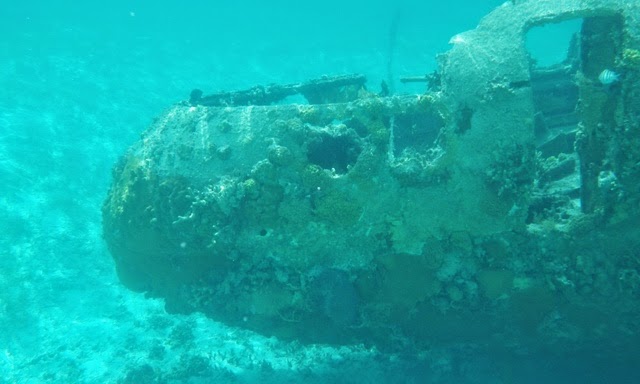 Can you find the Ray buried in the sand? 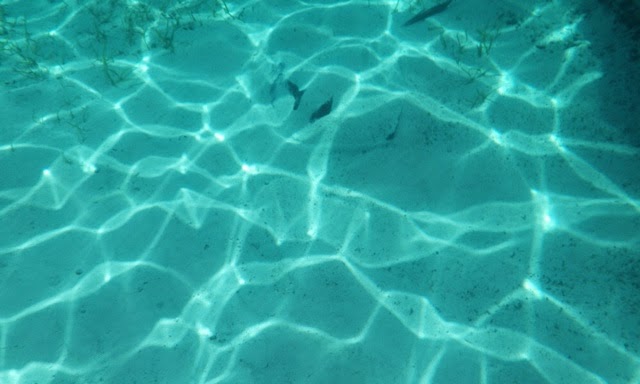 Andrew is one of the young crew members of Dubalamanzi. 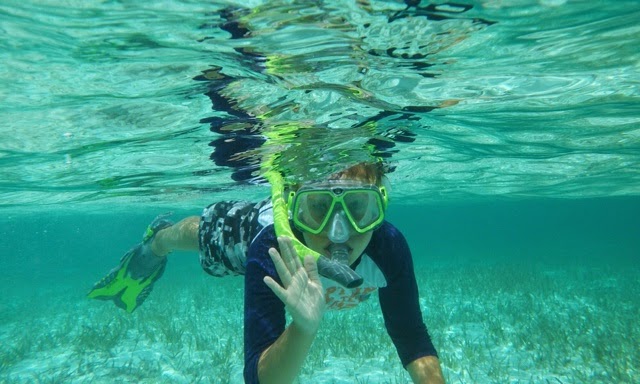 We reconnected with our new friends on Other Goose that we met through the folks on C-Soul when we were in Ft Lauderdale. A fun day was had exploring the mangove lined river through Shroud Cay and swimming in the natural whirlpool at the eastern end. 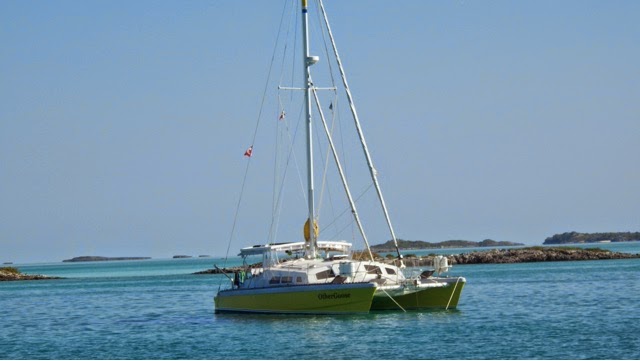 We did get held up for a few days hiding in the safety of the mooring field at Cambridge Cay waiting for a strong weather front to pass through. While we waited we enjoyed hiking the trails around us, snorkling and swimming. 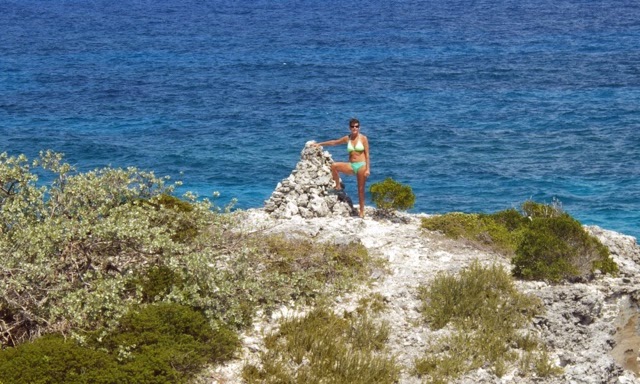 The weather front finally arrived and the storm did't disappoint. Of course these storms all come in the middle of the night and with each lightening flash you could see everyone awake in theor cockpits watching the other boats as well as their own making sure nobody broke loose from their mooring or dragged anchor. As the sun came out in the morning all the boats around us were fine however we heard on the radio that just south ofmus a 120 foot mega yacht washed ashore onto Pig Beach. We sailed down there the next day to see it but got theremjustnas thentwo,tug boats that had worked on it for hours finally got it floating and were bringing it out into deeper water.

After a short stop at Staniel Cay for water, fuel and provisions the exhausted crew of Pearl arrived at Black Point, visited the laudramat, finished all our chores and relaxed. 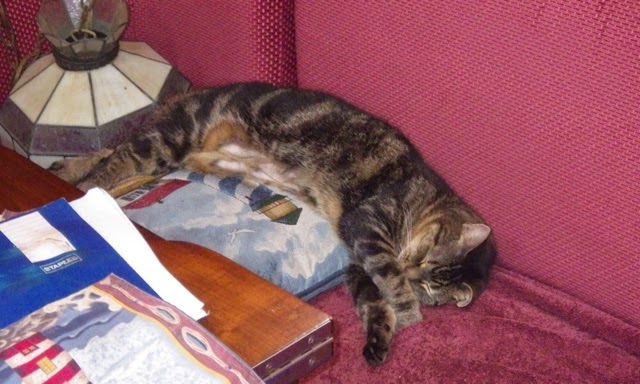 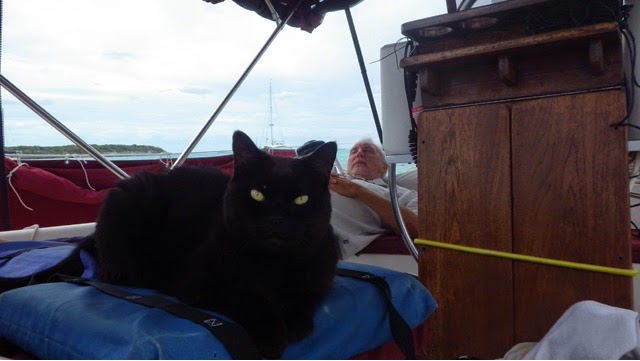 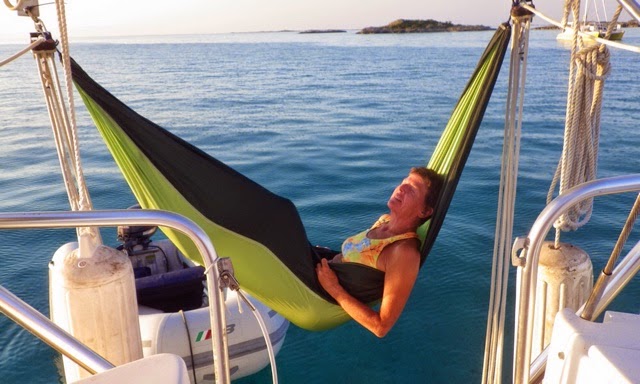 Tomorrow we begin our journey south to explore many new islands and anchorages that we have never been too. We can't wait!
Posted by Adventures of Pearl at 10:15 PM